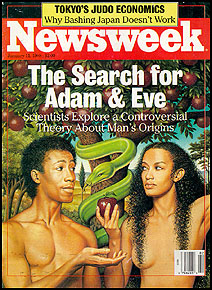 The first man and woman lived up to 200,000 years ago in an earthly paradise somewhere in southern or northeastern Africa, according to the Jesuit Father Angelo Serra, professor of genetics at Rome’s Catholic university.

Serra made the claim during a speech on the origins of man delivered to the general assembly of the pontifical academy on life, which began on Monday in the Vatican. The priest said his view was widely held as a result of research carried out in 1996 by academics in California and Arizona.Serra argued that this research supported the monogenist theory of only one “Adam” and one “Eve.”

“Eden, or earthly paradise, where man, with the biological structure of modern man, appeared for the first time some 100,000 or 200,000 years ago, would have been in the region of south or northeastern Africa,” Serra said.“From these regions, modern man would have developed towards Asia and Europe, where the ancestors of those alive today would have emerged between 30,000 and 50,000 years ago,” he added.On October 6, 1999, “Southern African Eve” was published by Daily Insight, a publication of The American Association for the Advancement of Science, the following was taken from that article.

Twelve years ago scientists at the University of California, Berkeley, concluded from DNA studies that “Eve,” an ancestor common to all modern humans, was an African. Now scientists in South Africa have tracked “Eve” to the Khosian peoples, who are the oldest indigenous group in southern Africa.The findings, presented at a recent human evolution meeting at Cold Spring Harbor Laboratory in New York, complement data from the male side: Y chromosome studies had previously pegged the Khosian among a handful of groups with Y chromosomes most closely resembling those of a common ancestor who lived in Africa 145,000 years ago (Science, 31 October 1997, p. 804). Mike Hammer of the University of Arizona, Tucson, who took part in the Y chromosome study, says the latest mtDNA work provides “important confirmation” of the team’s work.

Remember what the evolutionary standard bearer Richard Leaky declared in 1977: “There is no single center where modern man was born.” But now geneticists are inclined to believe otherwise. In a report from Newsweek, January 11, 1988, Stephen Jay Gould, a Harvard paleontologist and essayist, is quoted as saying: “It makes us realize that all human beings, despite differences in external appearance, are really members of a single entity that’s had a very recent origin in one place. There is a kind of biological brotherhood that’s much more profound than we ever realized.”

What do you think? Cancel reply